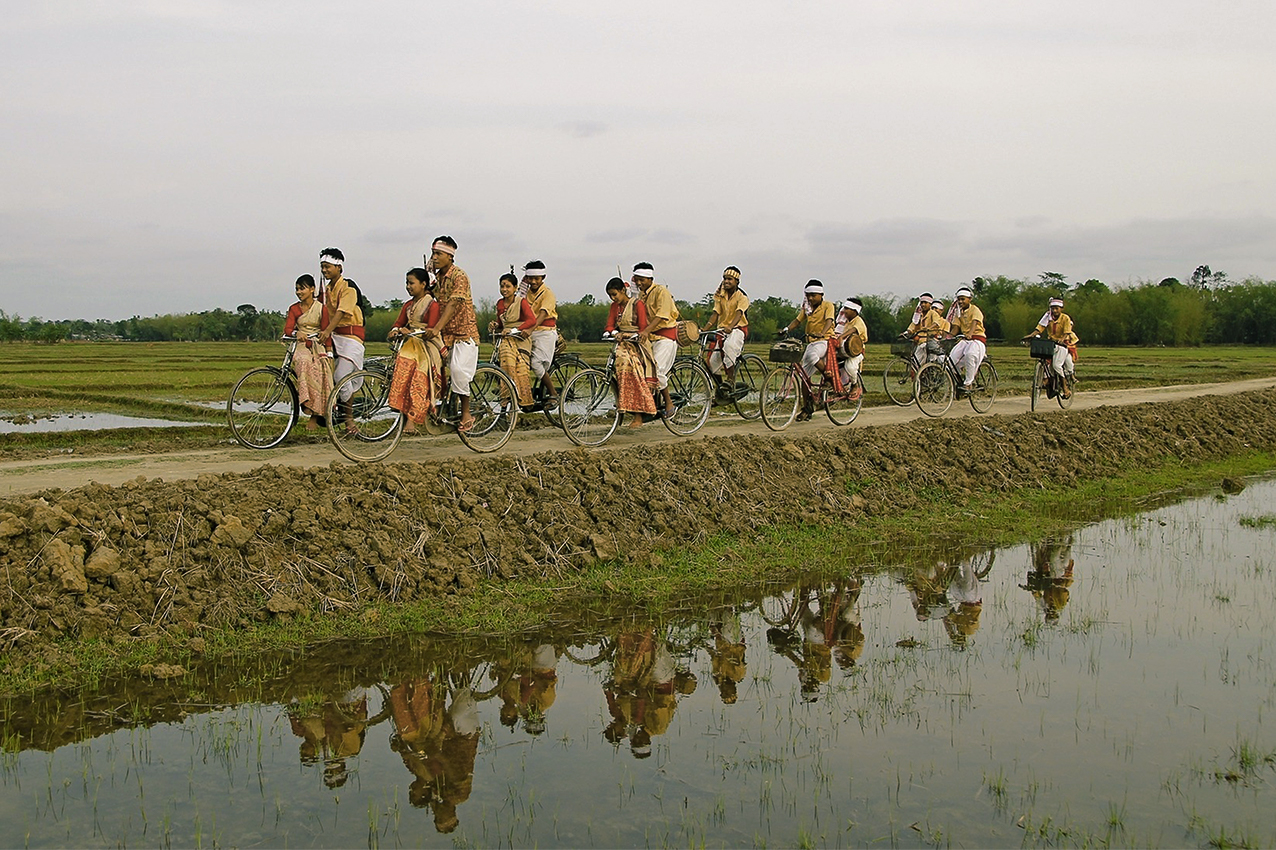 A Glimpse Into India's Northeast

An artist gives shape to the distinctive beak of Garuda on a mask painted for bhaona. Closeted hills give way to paddy fields, soon morphing into forests, and suddenly, tea gardens. A lone fisherman awaits on the Brahmaputra, the silhouette of his oar defined against the setting sun. The pungent aroma of bamboo shoot hangs in the air, pork is slow cooked over a fire. The thak-thak sound of the looms create melodies of labour, local women are weaving silk mekhela chadars.

For most of its long history, the northeast of India has remained in isolation, embraced by a mighty mountain range. Exploring the many cultures and diverse features of the land, this journey begins in Guwahati, a city that mirrors the geography of the entire region. Move to Cherrapunjee, the land of clouds – a place where the mist is entwined with the rocks, streams, and hills. From here, descend into Shillong, reminiscent of the Raj with its quaint old buildings. Play hide and seek in the grasslands of Kaziranga with the indigenous fauna species, then alight upon the river island of Majuli, where myths and legends come to life in the bhaonas. In Kohima, discover a rich tribal culture that has grown nestled comfortably within the Naga Hills.

Ringed by a cluster of hills, on the banks of the mighty Brahmaputra in the lower regions of Assam is the largest city of the Northeast, Guwahati. Home to several sites of religious importance, it is the entry into a remote world. The renowned Kamakhya Temple, a sacred site of worship for the mother goddess, Shakti, is one of the most visited places of the area. An ancient domed temple for astronomy rests on one of the hills of the city, proffering sweeping views of the landscape from its heights.

From this seat of power, the journey ascends the mountains of Meghalaya to alight upon Cherrapunjee. A land of high rainfall with undulating hills and green plateaus, the place cannot be mentioned or even thought of, without thinking about mist. The unique climate of this area creates impromptu mists every few minutes, rendering the landscape a sea of cloudy white seconds after viewing it in its green glory. In nearby Mawlynnong, discover how sustainable indigenous practices have made it the cleanest village of Asia. On way to Kaziranga, unwind by the Umiam Lake on the outskirts of Shillong.

In the open grasslands of Kaziranga National Park, encounter the indigenous wildlife. While it rose to fame because of the rare one-horned rhinoceros, the Park is home to a number of other rare species, like the wild water buffalo, leopard, swamp deer, and several migratory birds from Central Asia. After a day of exploration, experience traditional Assamese cuisine in a homely forest retreat.

Drive amidst the unending tea gardens and paddy fields, purple hills in the horizon, to reach Nimati Ghat, from where the ferries bring people to the river island of Majuli. A Neo-Vaishnavaite movement started by social reformer Srimanta Sankardev brought this island into prominence in the 16th century. His philosophy of ‘worship through art’ is still followed in the many xattras of the island, monasteries where people practice this philosophy through music, dance, and theatre.

A land of constantly changing landscapes, the region is heaven for those interested in geography. Ascend the hills of Nagaland from Assam after a drive through Nambor Habi, a forested area inhabited by local flora and fauna. In the capital city of Kohima, discover the rich culture of the tribes, a wealth of arts, dance, cuisine, and craft traditions. Come across fermented foods and the famous bhut jolokiya, the Naga King Chilli, capable of reducing even one who is very at home with spicy foods to tears.

Pondicherry has always felt like home, ever since the first time, many years ago. Travel is but the act...

Shanta Dhananjayan and her husband Vannadil Pudiyavettil Dhananjayan, one of the most revered dance couples...